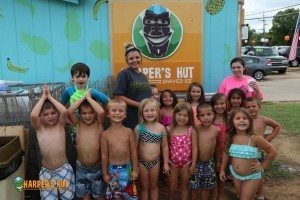 You’re driving, and driving, and you look left and you look right and you wonder where the best Snow Cone Tulsa is? Let us make it easy on you. Harper’s Hut has the best snow cone in Tulsa. How do we know? The people have nominated Harper’s Hut Shaved Ice through the Tulsa World two years running. Now what makes this snow cone vendor superior to other snow cone vendors you ask (1) they give back to the community every year (2) they open their seasons giving away free snow cones at every stand, (3) they have games for children, and (4) the desserts are delicious!. Oh ya, (5) the stands aren’t just old, boring boxes; they are a work of art. In fact, at one of their locations they have a bubble machine running all season long. Yes, streaming lots and lots of bubbles almost like a dream!

We are your one stop shop for Snow Cone Tulsa.