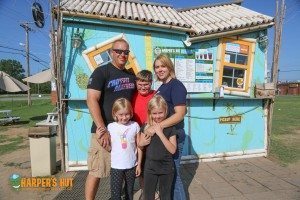 Let’s talk about snow balls. No, I’m not talking about the kind you throw, though Harper’s Hut has been known to do that. I’m talking about the snowballs you eat. Snow balls you eat? That’s right! Harper’s Hut has the yellow snow that is not only good to eat, but is considered by the Tulsa World to be the best snow balls in Sand Springs! Talking about yellow snow, we just made some improvements to our Lemon Meringue that make it to die for. So what exactly is a snow ball? Well, it’s technically shaved ice, but you won’t think so at Harper’s Hut. That’s because when William and Lindsay Nozak, together with their friend and partner Daniel Nix, opened the Hut in 2014, they were committed to going above and beyond the industry standard and purchasing a machine that shaves the ice as fine and soft as actual snow.

There’s more to a snowball than just softness, however. The flavors play an important part as well. Not only does Harper’s offer more flavors than any other snow cone stand in Tulsa, but they also compare flavors from different vendors to ensure that they only have the best of the best. But this distinction isn’t enough for Harper’s Hut. They don’t just carry flavors, they carry creations. In one of the first training videos a Harper’s Hut snowrista watches, William says “you can create anything at Harper’s Hut.” Though he’s also talking memories, and relationships, snowball creations are included in that too. I personally have five creations of my own at Harper’s Hut! Harper’s employees pride themselves on using the perfect ratios of syrup to create decadent desserts that will outdo any competition. Today’s Flavor of the Day is the “Infested Apple.” There’s a reason we’re known for having the best snow balls in Sand Springs.

So come see for yourself! Locate the hut nearest to you and come ready for adventure. Not only do we have the best snow balls in Sand Springs, we have the best snow balls in Mannford and Glenpool as well! Our delicious treats are even available inside the Sapulpa Aquatic Center! Oh, and guess what. It’s Saturday! You know what that means? Free Family Movie Night in Glenpool! Bring your kids, bring your spouse; you can even bring your dog! We’ll be watching How to Train Your Dragon as soon as the sun goes down! The party never ends at the home of the Volcano. If you can’t make it out to one of our weekly parties, then invite us to your own! We’ll help you celebrate your birthday or put on a fundraiser! Whatever you want, we want to see your dreams come true.