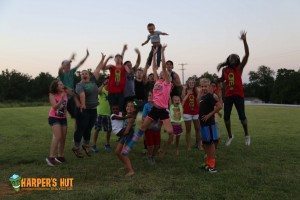 In June of 2014, Harper’s Hut opened its doors and was quickly recognized as having the best shave ice in Sand Springs. Sandites flocked to this delicious gourmet treat like it was something they’d never had before, impressive, considering Sand Springs already had two other snow cone stands. So just what was it about this snow cone stand that was so able to entrance the masses? Well first, let us look at what shave ice is. Shave ice started in Japan a thousand years ago, when Japanese royalty would have ice brought down from the mountains during winter and stored in a cave to keep it cool. In the 1920s it was brought to Hawaii by plantation workers and from there made its way into the rest of the United States.

Shave ice has come a long way from being cut with Japanese swords, though some stands in the Sand Springs area still seem to be stuck in the stone age (as in, their ice is as hard as a rock). That’s one key component that sets Harper’s Hut apart as having the best shave ice in Sand Springs. The Hut shaver is top of the line, the best money can buy, and is guaranteed to be as soft as snow. Not only does Harper’s have the best shave ice in Sand Springs, they also have the best flavors in Sand Springs as well. I would know, I’m on the Harper’s Official Taste-Test-Team! We meet multiple times a month to compare flavors from all different vendors to ensure that we’re carrying only the best on the market. Our flavor of the day today is our original Tiramisu creation.

Harper’s stands apart in other ways as well. Everything about Harper’s is original. From their creations, to their heart for the community, Harper’s is a snow cone stand like never seen before. From the little things, like always keeping a bin of toys, such as Frisbees, footballs, hula hoops, and more, to the big things, like free family movie night, fundraisers, and even a whole weekend of free snow cones at their three locations. Not only does Harper’s have the best shave ice in Sand Springs, but they have the best heart in Sand Springs too. Locate the Hut nearest to you and come down and enjoy what Tulsans are calling the “Best in the World.”