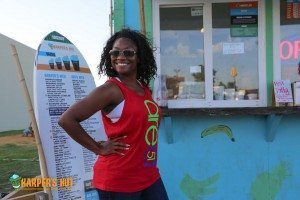 What exactly is a New Orleans Sno Ball? Well, it’s a form of shaved ice, like a snow cone, that has developed into its own unique dessert in the Big Easy. Something about New Orleans is magical, and both original NOLA creations, as well as things that New Orleans has adopted have a quality to them that is impossible to find outside of the city. Jambalaya, Po-boys, Jazz, and Beignets; these things may be found around the world, but no one can bring them to life in the same way as the Cajun city. Until recently, sno balls were on that list. The New Orleans sno ball is a shaved ice treat that set itself apart from the snow cone due to how incredibly soft the ice is. Before June of 2014, true New Orleans style sno balls were only in NOLA, but then Harper’s Hut opened and became the best New Orleans sno ball in Sand Springs.

William and Lindsay Nozak had the idea for Harper’s Hut during a time of personal transition and were looking for something new to bring more passion and fulfillment to their lives. They were soon joined by friend and business partner, Daniel Nix, and in less than two months from their opening day they were declared by the populous to be not only the best New Orleans Sno Ball in Sand Springs, but the “Best in the World.” The Harper’s family takes shaved ice seriously. It’s not just a quick money-maker for Harper’s, it’s a lifestyle. The Nozaks have made all of their employees and customers feel like family, and they’ll be the first to tell you that is their primary goal. But their secondary goal is to be the best in the industry at selling gourmet shaved ice. That means studying Baltimore, New Orleans, Hawaiian, and other snow cone styles to improve and perfect their product. This passion to be the best has led to the creations of the famous “Volcano,” “Harry Potter Butterbeer,” and today’s Flavor of the Day, “Snickerdoodle!”