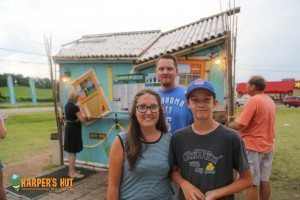 What makes a great sno cone? Is it the ice? The flavor? The atmosphere? In 2014 William Nozak set out to discover just what it is that makes shaved ice so great. He visited snow cone stands across the land and analyzed everything from their technique to their presentation. In June of 2014 he brought his vast knowledge together and opened Harper’s Hut sno cone stand in Sand Springs. In less than two months, his brainchild was called the “Best in the World” by the Tulsa World newspaper, and a year later he’s expanded to four stands, two mobile setups, and has plans to expand even more by next summer. What has made all of this possible?

Harper’s Hut doesn’t settle for mediocrity. With one of the best machines on the market, you’re guaranteed to have the softest sno cone Sand Springs has to offer. Not only that, but Harper’s also has the largest spread of individual flavors, as well as the largest and most delicious menu of original creations that you won’t find anywhere else. Harper’s prides themselves on being the “home of the Volcano.” However, they also have dozens of other creations that will leave the competition in the dust. For instance, Harper’s has the only authentic “Harry Potter Butterbeer” sno cone in Sand Springs! Some other stands may try to sell you buttered beer and lie about it being the same thing, but Harper’s Hut cares more about quality than about making a quick buck. Some of my personal favorites are the “Extreme Cream” and the “Homemade Vanilla Ice-cream.” I also have one of my own creations, self-titled “The Scott,” that you can get in Sand Springs and Mannford! It’s not on the menu, but ask for it and they’ll know what you’re talking about.

Most importantly, Harper’s understands that when you go out for a snow cone, you’re looking for more than just shaved ice. Harper’s is careful to guarantee excellence from the presentation all the way through the consumption. Each stand has ample seating, music, games, Frisbees, hula hoops, footballs, and more so that you will have plenty of entertainment. The Harper’s team isn’t out to sell snowcones, we’re out to sell an experience. We want you and your entire family to come down and have a good time and enjoy the best sno cone Sand Springs at an affordable price that will never be out of your range.

So locate the Harper’s nearest to you and come ready for a great time! Book us for your next event; pick up a 40 serving ice chest for only $40! Join us for one of our free movie nights we host every weekend. Most importantly, I hope you have a great day, and I hope that Harper’s Hut sno cones in Sand Springs can be a part of it!