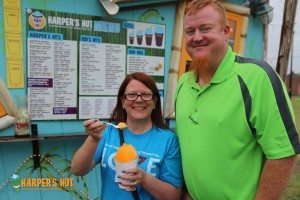 Shave Ice is in Sand Springs, Hawaiian style! Hawaii is known for their delicious ice shaves, and soon Harper’s Hut will be known as the company that outdid the original. Founded in Sand Springs, Oklahoma in June of 2014, Harper’s Hut was quickly named the “Best in the World” by the Tulsa World readers, outdoing companies that had been in the Tulsa area for more than 20 years. With bigger and better ideas than ever before brewing in the minds of Harper’s creative team, it’s only a matter of time before Harper’s is recognized as the best in the state, the country, and one day the universe!

Hawaiian shave ice is unique for many reasons, one of which is the scoop of vanilla ice cream located in the bottom of the snow cone. Shave Ice Sand Springs-style is even better. Harper’s Hut has both vanilla and chocolate ice creams and place them right in the middle of your snow cone (optional of course). Layering snow, syrup, icecream, snow, syrup, maximizes the flavors and creaminess of your snow cone in a way that no one else has ever done before. While lazy and uncreative businesses are bound to start copying us sooner or later, we want you to know that Harper’s did it first!

Harper’s is doing a lot of things first in the Tulsa area, and a lot of things better than ever before. For instance, not only does Harper’s offer more games and entertainment every day of the week than any other stand out there, they also host free family movie nights every night of the weekend at their three locations in Sand Springs, Glenpool, and Mannford. You can even book them for your own private events, and they’ll bring the movie screen, the slip ‘n’ slide, and can even set you up with a mid-summer snowball fight! You heard that right! Harper’s Hut is on the leading edge of innovation, and they do it all out of a willingness and desire to serve and better their communities. So locate the Harper’s nearest to you and come ready for a great time!