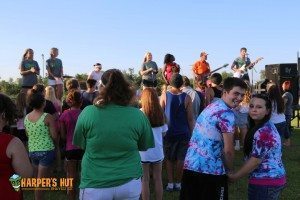 Shaved ice was first brought from Japan to Hawaii by plantation farmers at the beginning of the 20th century. Once there, it developed into a cultural treat unique unto itself. While shaved ice spread across the country, Hawaiian shaved ice has always had its unique traits that made it something that could only be found in Hawaii. That is, until Harper’s Hut opened in Sand Springs, Oklahoma last June. William and Lindsay Nozak had the idea for Harper’s Hut and were joined in their venture by friend and business partner Daniel Nix. Within two months, they were recognized as not only the Best Hawaiian Shaved Ice in Sand Springs, but the best in the Tulsa area as well.

There are a lot of unique qualities to Hawaiian shaved ice that sets it apart from most other snow cones in the world. Harper’s Hut has been careful to study these qualities, and not just replicate them, but improve on them as well. For a time, Harper’s was the only Hawaiian shaved ice in the area. Competitors have tried to mimic Harper’s original creations, but with little success, leaving Harper’s as the indisputable best Hawaiian shaved ice in Sand Springs. From the delicious ice that is as soft as snow, to the crisp flavors, to the original creations like the “Volcano,” and “Harry Potter Butterbeer,” no one in the area can compare to Harper’s Hut on quality and genius. Today’s exquisite Flavor of the Day is “Peaches and Cream.”

So come on down to Harper’s Hut today and try out the best Hawaiian shaved ice in Sand Springs! Or if you’re in the Mannford area, stop by the Hut there and enjoy a free screening of “How to Train Your Dragon 2” at their weekly free family movie night! Invite Harper’s to your next party or fundraiser, or pick up a 40-service ice chest for only $40! Locate the nearest Hut to you, and come ready to have a blast!