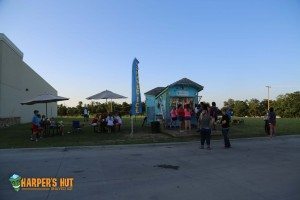 Upon reading the title of this article, you may wonder, “What the heck is the best gourmet ice in Sand Springs?” Well that’s what I’m here to tell you about! When you get a cosmic brownie out of a Little Debbie box, you’re not expecting gourmet. However, that $5 brownie cake you got for dessert at Olive Garden had better be gourmet for that price! Similarly, an $8 molten fudge sundae from Charleston’s Steak House isn’t even in the same category as a Buggs Bunny shaped ice cream from a truck. That’s the difference between Harper’s Hut and the competition. While other Sand Springs’ snow cone stands were content to keep crushing ice to the same texture as the ice machine on your freezer, Harper’s Hut was preparing to do something totally different. CEO William Nozak had the idea for Harper’s Hut after experiencing a loss in his family that caused him to feel a need to do something new and break out of his routine. He and his wife, Lindsay, approached their friend Daniel Nix about partnering to open Sand Springs’s first gourmet snow cone stand. Customers immediately began to call Harper’s the best gourmet ice in Sand Springs, and within two months, Harper’s was voted by Tulsans as the “Best in the World,” dethroning shaved ice vendors with decades of history in Tulsa.

Harper’s Hut has no desire to be “just another snow cone stand.” Their mission statement itself expresses their desire to be the best in the industry at selling gourmet ice, and they’ve not slowed down a bit in their strides towards that goal. Harper’s holds biweekly brainstorming sessions with a team of employees and volunteer customers to try new flavors, new creations, and to critique every aspect of their business. The best gourmet ice in Sand Springs is only getting better. Perfection, though unattainable, is always the goal. This attitude has led to creations such as the only Harry Potter Butterbeer in the area and the Sand-Springs-famous Volcano. Harper’s menu includes more than eighty flavors, hundreds of original creations, and toppings such as ice cream, whipped cream, cheesecake, and even dill pickle. In the last month they’ve also added two 100% fruit juice options, in addition to their sugar free syrups, to entice healthy eaters. Our flavor of the day today is “Infested Apple…” infested with gummy worms of course!

Harper’s is more than just the best gourmet ice in Sand Springs, however. William believes in community, and it shows in the way he runs his business. Harper’s has contributed more than $6000 for charities through fundraising events and donations, and has had multiple free snow cone events just to be a blessing to the city. Add to that the free family movie nights that Harper’s hosts each weekend at their three locations, the snowball fights and slip’n’slide events, and the games and toys that are always available at the Huts, and you’ve got one sweet business.